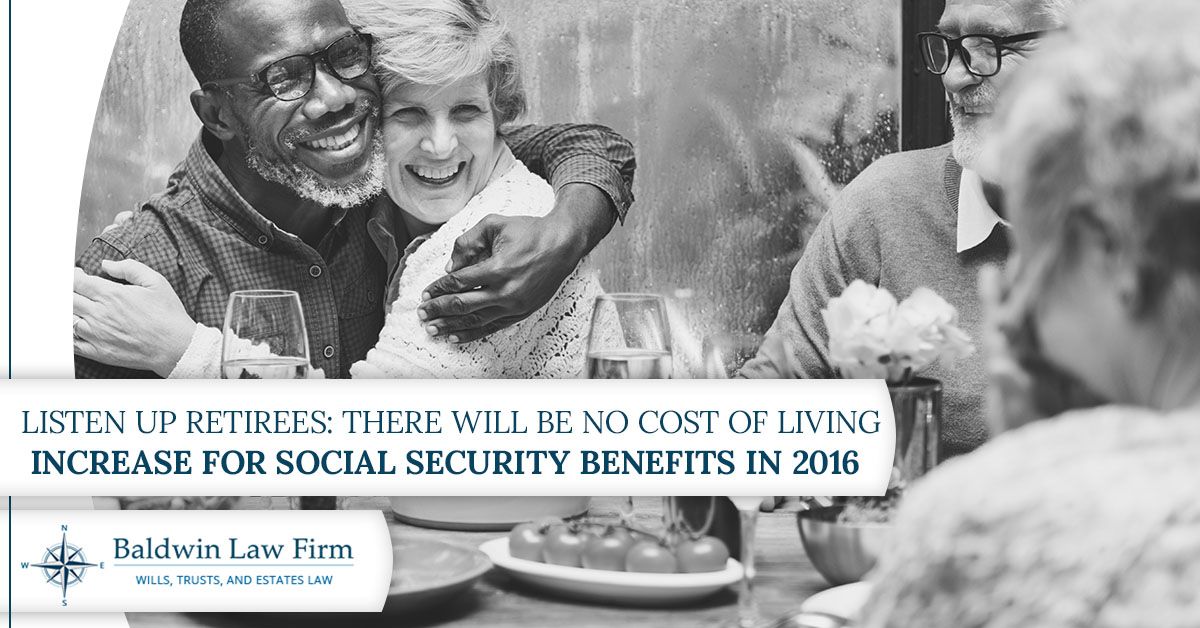 Listen Up Retirees: There Will Be No Cost of Living Increase For Social Security Benefits in 2016

The latest news released by the Social Security Administration has not been well-received by the 65 million retirees, disabled workers, and their families who rely on Social Security benefits for their day-to-day living expenses: For the third time in seven years, Social Security recipients will not see a cost of living increase to their monthly checks.

HOW CAN SOCIAL SECURITY BENEFITS REMAIN FLAT WHEN MEDICAL EXPENSES ARE SKYROCKETING?

With the cost of medical care soaring, this doesn’t seem to make any sense, does it? It does when the metric used to calculate the cost of living increases, the Consumer Price Index for Urban Wage Earners and Clerical Workers (CPI-W), is broken into its components. The CPI-W is the Department of Labor’s estimation of inflation for the cost of a variety of goods and services, including food and beverages, housing, clothing, airfare, gasoline, medical care, TVs, toys, pet products, college tuition, telephone services, personal services, and funeral expenses. As gasoline prices have rapidly declined over the past year and continue to remain low, so has gone the CPI-W – in fact, it dropped 0.1 percent in August and another 0.2 percent in September. While on average increases of four percent have been made to Social Security benefits since the cost of living adjustment was introduced in 1975, overall the CPI-W was flat from the third quarter of 2014 to the third quarter of 2015, which means no adjustment to benefits in 2016.

Another downside to no cost of living adjustment in Social Security benefits in 2016 is the potential for outpatient care premiums for Medicare Part B to more than triple for some retirees.

In years when Social Security benefits rise with the adjustment, any increase in premiums would be covered. In years when benefits remain flat, there is a “hold harmless” law that will protect about 70 percent of Social Security recipients from having their benefits reduced due to premium increases. But in 2016 the other 30 percent of recipients, including those who are new to Medicare, federal retirees who are not eligible to receive Social Security benefits, and individuals who make more than $85,000 a year, will see their premiums soar – the average change has been estimated to go from $54 per month to $159 per month.

ARE ANY CHANGES ON THE HORIZON TO HOW COST OF LIVING ADJUSTMENTS ARE CALCULATED?

While Social Security recipients did receive cost of living increases for their benefits in 2012 (3.6 percent), 2013 (1.7 percent), 2014 (1.5 percent) and 2015 (1.7 percent), in 2010 and 2011 and now again in 2016 Social Security benefits will remain unchanged. Advocate groups for seniors argue that the CPI-W is a poor metric for adjusting benefits since it measures the spending habits of certain people in the workforce (“urban wage earners and clerical workers”) – they claim that workers drive more (and are paying less for gasoline) and spend less on medical expenses, which skews the CPI-W to the disadvantage of retirees. Instead, advocates want benefits to be tied to the CPI-E (CPI-Elderly), which takes into consideration the spending habits of retirees. In fact, a bill has been introduced that would change the metric for calculating the cost of living adjustments to Social Security benefits from the CPI-W to the CPI-E. Unfortunately, in this year before a presidential election year, only time will tell if the bill will gain any traction. But perhaps millions of unhappy seniors will be able to sway their representatives in Washington towards change. For more information, contact the estate planning lawyers at Baldwin Law Firm!